Utopia on the River Eden 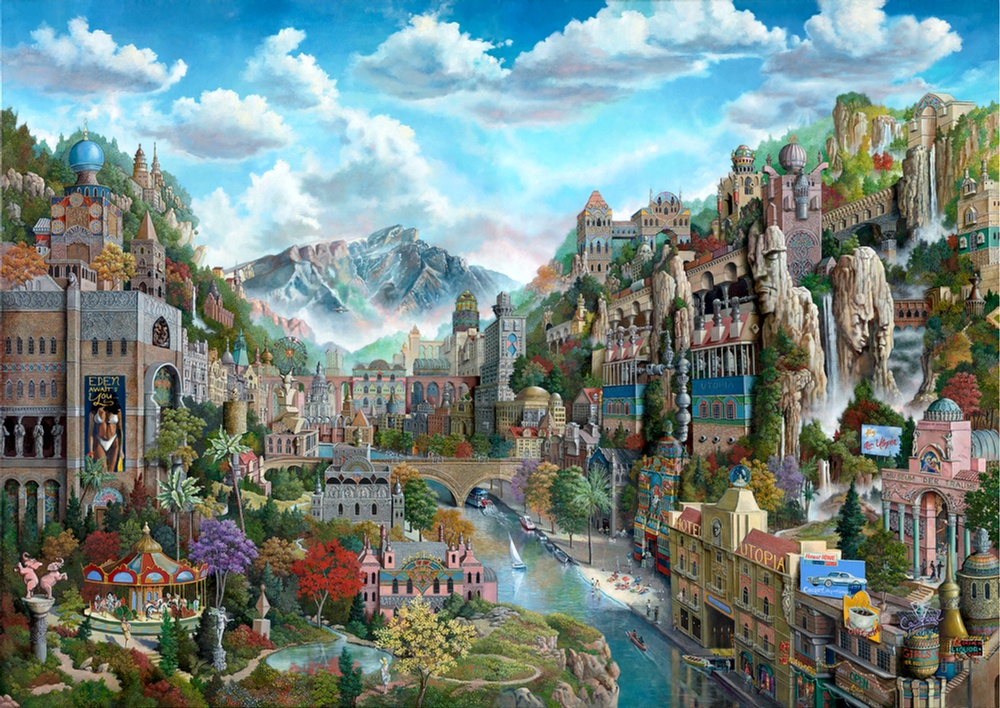 I found myself in my studio, the world outside silent and void of movement and human sound

"Utopia on the River Eden" was started two weeks before all of Israel was put into “Lockdown” in reaction to the Covid 19 virus.  I found myself in my studio, the world outside silent and void of movement and human sound, other than those of my lovely wife.  Armed with my brushes, paints and canvas I went to work on my greatest project until now.  I had begun to paint a utopian vision of the perfect city.  A seminal work in my “Hotel Utopia” series.

Before I begin describing the work, it must be noted, that I fully understand and am aware that we, as humans, do not all share the same ideas of both a personal and a collective utopia.  For one to experience utopia it is going to have to be both in the micro and macro definitions of the sublime.

Rather than hugging a tree, they would rather straddle a bar stool

On the macro level, as in building a city, this city is going to have to appeal to the needs of most or all of its citizenry, and within this construct also take care of the individuals needs as well.
Probably the most difficult factor to come to terms with is deciding what our personal utopia looks like and is composed of?  The default concept of utopia is usually a lovely river bank, strewn with spring flowers, a blue sky above and the sounds of water trickling across smooth stones, often accompanied by someone or people you find attractive.
But people, though they may seek this vision for a moment or a short spell of time, on most occasions choose to live in large, loud and rather filthy cities.  Humans, like moths, find the hum and hue of neon lights and crowds of people intoxicating.  Rather than strolling along the river bank they would rather be plying city streets, like canyons, surrounded by throngs of strangers, a touch of violence and fear in the air.
Rather than hugging a tree, they would rather straddle a bar stool.  While instead of spending time taking a dip in a pond with someone they love, the allure of shops pandering to all sorts of perversions and sex free of commitment pulls them in off the street.

In the creation of my visual utopia, I have chosen both sides of the utopian coin. On one hand my vision is filled with trees, flowering in an assortment of rich colors, mountains and hillsides, dotted with lovely architectural creations and waterfalls, while on the other hand the town is somewhat dominated by the industrial presence of a railway line atop the Hydro Utopia turbines, a clash of the natural and the mechanized which makes good use of the plentiful water to power my dream.
Of course there is a casino bordering a lovely park home to a carousel and sculpture garden.

The River Eden runs through the center of the town and sports of beach close to the temple and sidewalk cafes.  Hotel Utopia sits on the river, its balconies offering up quaint views of passing conoeists , bathers and folks fishing.  This part of town is where one finds Chinatown, restaurants, coffee houses, strip joints and a store selling liquor and guns 24/7.  Just up the hill from this part of town is the Museum of Dreams, where some rather peculiar things take place.

When one travels up the river, they find a city filled with residential properties and office towers, mountains just off in the distance towering above my invented landscape.

I freely admit that my Utopia is based on western concepts of how an economy interacts with a working city  but in my travels which have taken me from Toronto, to Paris to Bangkok, New York, Sao Paolo, Istanbul, Marakesh, Florence and Tel Aviv, I have an idea of what makes a city work for me, and seemingly for much of human kind.

What is most important is that you find the work both beautiful and compelling.  Hopefully the work will pull you in and you can become a tourist touring my city or maybe a interested party looking to buy or rent a place in Utopia on the River Eden.

A carousel gently turns, you can almost hear the music.

Please note that we do not all share the same ideas of a personal or collective utopia.  We may differ in our sense of aesthetics, our appreciation of our surroundings, our wants and needs.

For one Utopia may be a lovely pond surrounded by nature, the call of birds, the rustling of young wheat in the fields,  far from the maddening crowd,  While another wants the electricity of a busy urban metropolis, surrounded by humanity and the glow of neon lights and thousands upon thousands of windows and opportunities.

We are all different, which leads me to create a city which combines both the urban with the pastoral, the neon mixed with the slow movement of a river and a hillside of flowers.

A carousel gently turns, you can almost hear the music.