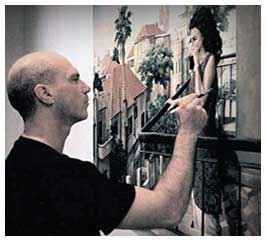 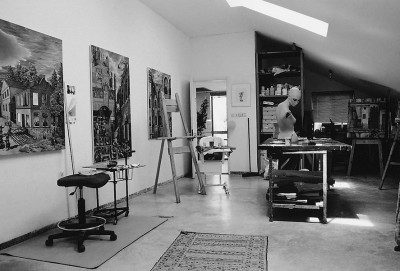 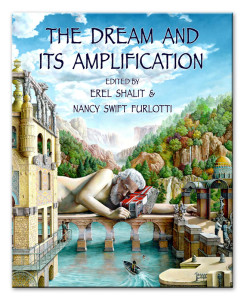 We want to thank Howard Fox for granting permission to reproduce his painting ‘A Giant Dream’ on the cover of this book. Howard Fox’s paintings are in the genre of magical realism, depicting a realm of fantasy with precise details, creating an illusion of reality, so often found in dreams.

In this painting, we see the more personal side of the psyche being drawn deeper into the unconscious, as reflected by the different figures whose attention turns to the sleeping giant. The policeman, who halts a couple from approaching the sleeping giant on the bridge, might represent that aspect of consciousness, which out of fear prevents access to the archetypal realm, to the underworld of dreams.

We may wonder, who is he, the dreaming giant? Is he a giant image of the dream’s centrality in the unconscious mind? He is seen, and on the verge of being approached by consciousness. Sleeping on the bridge, the giant delineates the boundary between the more personal narratives in the foreground of the psyche (and the painting), and the psyche’s roots in nature, which in the distance becomes increasingly whole and undifferentiated.

The giant uses a red fire engine for a pillow. While asleep, a fiery libido is subdued. What will happen when the giant wakes up? Or, similarly, when we approach the images in our dreams?

The painting is an image with a story to be looked at, read, explored, contemplated, and partly understood.

We invite the readers to circumambulate the image of the dreaming giant, and to trace the embedded stories in this giant dream, just as we hope the chapters in this book will inspire the reader to explore the amplifications of their dreams and images.

For many, Artist Painter Howard Fox has been seen as a realist, a hyper-realist, a magic-realistic artist. Why? Because his hand is superb, his technique is impeccable, and his paintings are accessible. But these labels are wrong all the same. What Fox produces is Imaginative Realism. He imitates nothing and creates everything. He crafts the environment and its structures like a master architect. He places his characters precisely and intimately in dark corners of his stage … as deftly as a theatrical director. The viewer can even hear him whispering the dialogue into the ears of his performers. He colours mood and light as if behind the camera of an impossible cinema. Here is Babylon. Here is Bangkok. Here is the city of your dreams and there, the city of your fears. And here is Hell. All fictions, yet all alive and real and possible … despite the impossibility of everything.”