A tourist in Utopia – The bizarre realist art of Howard Fox 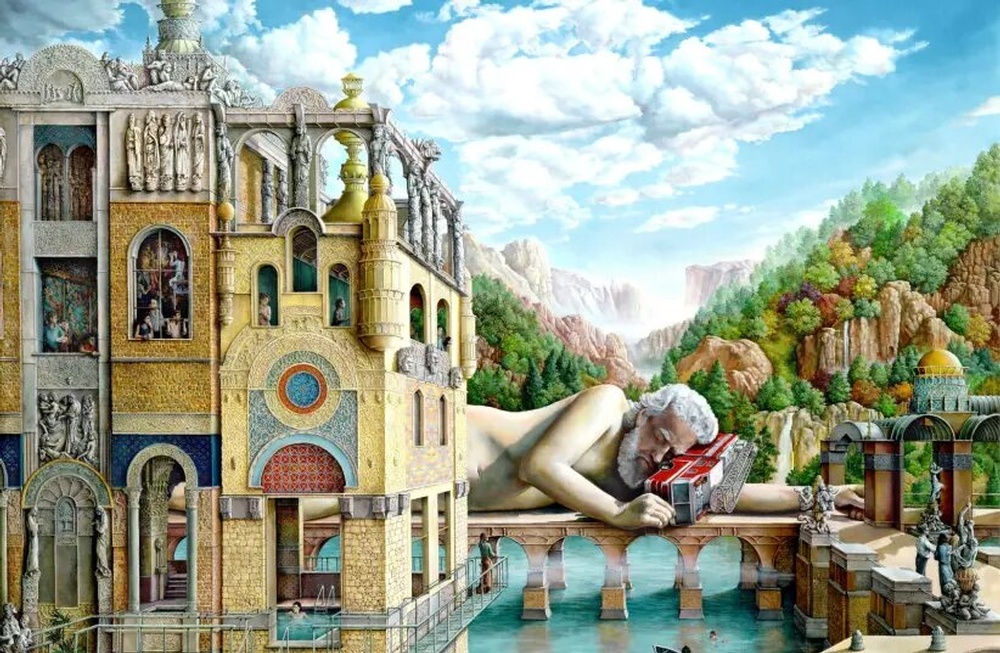 A painter of cities since the age of nine, Howard Fox combines Jewish art with a deep fascination with the realistic art tradition.

In a painting titled Ten Sefirot, Candian-Israeli painter Howard Fox painted winged angels hovering in a fantastic landscape, with structures caped with blue and gold domes and mountains. They carry gold hoops, held, for that brief moment, as the kabbalistic drawing of the Ten Sefirot. The qualities of the divine function in relation to one another and, according to mystical Jewish thought, are its nature and the hidden reality beneath the flesh of the world. It is a highly unusual depiction of the mystical concept and Fox is very much aware of it.

“I’m sorry to say so,” he shrugs, “but for many centuries Jews were not into art. We could make jewelry, so we made great jewels” a Torah crown or a Yad to read the Torah with, “but we didn’t have money to invest in the arts.”

Above the angels one can see a commercial aircraft, hinting that this is not a fantasy scene divorced from our everyday lives, but an event that is taking place alongside it. This is an ongoing motif in his paintings. In Giant Dreams, a giant sleeps on an ancient bridge and uses a modern-looking fire truck as a pillow. In another painting, called Attention Wall Mart Shoppers, a giant baby is wrecking a shopping center as if it was a massive toy while a network helicopter is poised in the air ready to capture it on film for the television.

“It’s like watching the modern trams entering the Old City of Jerusalem,” he says, “to me, there’s eye candy in that. The guys who built Hagia Sophia,” Isidore and Anthemius, “did not imagine [in 537 CE] that one day tour buses would be parking outside of it and guys like me walking around in baggy shorts checking out the ancient site.”

Born in Toronto and raised in a neighborhood full of Holocaust survivors, Fox had been painting and drawing cities since he was nine years old.

“My father would get his shirts from the cleaners and they would use a wonderful paper as the back of the folded shirts,” he explains, “it was fantastic paper to draw on.” A hyperactive child, his parents encouraged him to continue with his art interest and he never stopped. “I never had an office job,” he said, “with the exception of working in a kibbutz for a spell, I’ve always created art.”

Fox is a painter of fiction, of the imagination and of cities. His cities hover in the air like the rock in the 1974 science fiction film Zardoz with Sean Connery. They appear from cracks in the sky, function as a stage for giants to move around in, and even recruit young men to pull them with a rope. This last painting, The Weight, depicts Fox’s son before enlisting into the IDF.

Raised in Canada, Fox had a few false starts before he finally decided to come to Israel for good and to paint in oils. He worked in a kibbutz for a while, returned to Canada and there became fairly well known in the artistic ketubah (marriage document) market. One line of work he taught himself is Hebrew calligraphy.

“Even the Catholic Church”, he joked, “is no longer making illuminated manuscripts, and here we were doing some good work.” As ketubot are written in Aramaic, not Hebrew, they are not a sacred document and can be written and painted by non-religious Jews and even non-Jews. “I loved it,” he said, “if I wanted to paint Adam and Eve or the beauty of Alaska I could do so, there is absolutely nothing wrong with it.”

In Israel, he was quick to find out, the demand for high-end ketubot isn’t so great, so he decided to do what he always wanted to do anyway – paint in oils.

“I painted things from my imagination. It was always very important to me.”

This is why he got his artistic training as an etcher and print maker rather than a painter as, at the time, he’d be expected to present abstract paintings that he didn’t care for.

“It’s interesting to note that abstract painting is, perhaps to Jewish painters, an attempt to hang on to the law,” he said, “because you need to have a cannon of thought to explain it, and a linear line of reasoning you must follow to get to that conclusion.”

Pointing to the iconic 1918 painting by Kazimir Malevich White on White, he claims that if one accepts this linear argument that art is created by a process of each generation asking questions that the next generation answers, “painting really did come to an end in Russia when that painting was made.”

Fox is much less concerned with academia and being within a linear path, as lines usually come to an ending point.

“In Japan there was a time [the 14th century Muromachi period] when people painted mist because their culture had a big interest in the idea that things emerge from the void,” he said.

“Eventually this led to people painting fewer and fewer figures and landscapes and more and more mist, until you had paintings devoted mainly to mist and fog.”

One can see this progression when comparing the works of Josetsu to Tenshō Shūbun, both Zen monks in addition to being painters.

Japanese painting did not remain keen on mist during the following six centuries, and for Fox, the main focus of his own art is the moment in which various possibilities open up.

“To me, giants represent power, strength and the unknown. A giant sleeps on the bridge; what will happen when he wakes up? Will he destroy the city or delight the residents with stories? “

In another series of paintings, titled Hotel Utopia, Fox explores his vision of utopia as something that, whether we like it or not, doesn’t really exist. At the bottom of Hotel Utopia One is a body with two detectives standing over it. In Hotel Utopia Welcome there are several figures – including a midget, a French maid and a clown – who welcome the viewer into the scene.

“The staff in the hotel are very helpful,” he jokes. “If you want to shoot yourself in the head, they’ll give you a gun and bullets and clean up afterwards. If you want rough sex, they’ll send someone over. The moment you choose to go inside, you’ll be taken care of.”

On a more serious note, he adds that this is only one way in which Utopia can be understood, it is also a place of sublime beauty and complexities.

“I like this idea of being a tourist in Utopia,” he smiles. Prints, paintings, and Ketubot by Howard Fox can be seen on his website www.howardfox.com/ An exhibition of his paintings is set to open on June 11 at the Artist's House in 9 Alharizi St Tel Aviv